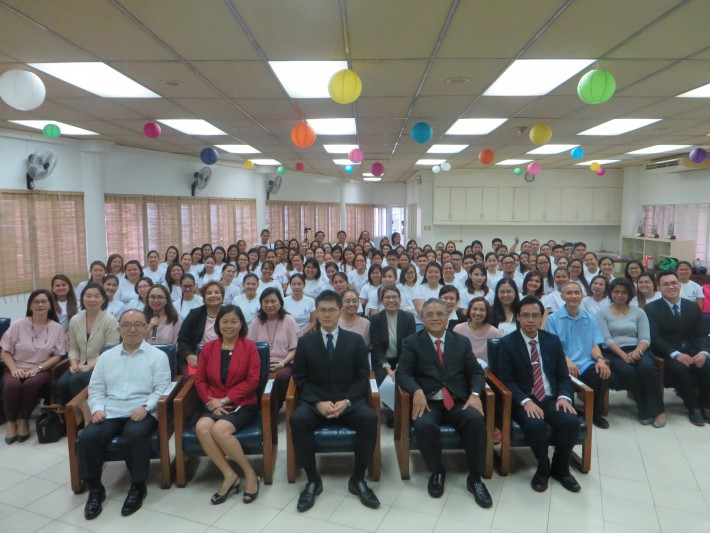 In an Opening Ceremony held last November 9, 2017, NCF Manila welcomed its 10th batch of students for the Preparatory Japanese Language Training for Nurses and Care Workers under the Japan-Philippines Economic Partnership Agreement (JPEPA). NCF will train 110 students who, after finishing their intensive 6-month course in Manila, will move to Japan for another six months of further language studies before finally starting their work at different Japanese hospitals and care-giving facilities.

Head lecturer of the program, Josef Orillo-sensei, said that the goal of the training is not only to study and understand Nihongo as a language, but also to practice and apply it as a method of communication. He explained:

“Learning Nihongo is very similar to learning a physical activity, like basketball, for example. Anyone can sit down and learn the rules and how to play the sport. But to actually learn how to play and play well, there’s no other method than to go out and practice every day until your body learns and moves through instinct.”

Both Orillo-sensei and Mr. Hiroaki Uesugi, Director of The Japan Foundation Manila Office (JFMO), which oversees the program, also emphasized in their messages to the students the importance of developing the habit of self-training.

“After finishing the training here in the Philippines, and in Japan, you will start training and working at Japanese hospitals and care-giving facilities. Therefore, it is very important that you establish this basic Learning Cycle – preparing, attending class, reviewing and self-study during the training period,” said Mr. Uesugi.

President Sanvictores, in his message, reminded the students about how being among the few chosen Filipinos in the EPA program is truly a great opportunity that also comes with great responsibility.

“…this did not come by going to the sari-sari store and say, “Pa-order nga ng isang trip to Japan para mag-trabaho ako doon. At kung ayaw ko na, sauli ko na lang sa inyo. Can you imagine, “hindi lang yun basta-basta na ordinaryong kontrata between me and Director Uesugi. Hindi. Our government, the Senate, had to pass it as it was a Treaty.”

“Japan also needed to pass this Agreement through their parliament more than 10 years ago. So what you entered now, what it means, is you are blessed. But it also means you have the responsibility to work hard. Not only to yourselves, but also to your families; and also to our Government that has worked so hard to make this thing happen.”

As a response, Ms. Shydney Faye E. Quillosa, representative of the 10th batch, acknowledged in her speech the opportunity and challenges that they may face

“I would like to take this chance to express our gratitude to the Philippine Government as well as the Japanese Government for this wonderful opportunity. We also have the added honor and responsibility in representing fellow professionals of the Philippines overseas. We do know that caregiving is a noble and fulfilling job, and I can say that not all have the guts to pursue it.”

For 2018, the JPEPA Program for Nurses and Care Workers has more than 300 candidates. Aside from NCF Manila, two other institutions—TESDA and the Personal Ability Development Foundation, Inc. (PAD)—are conducting the preparatory language training including lectures about Japanese society, customs and manners, geography, and other topics related to general life in Japan.

For the full speeches of the guests and photos of the Opening Ceremony Program, see resources below.