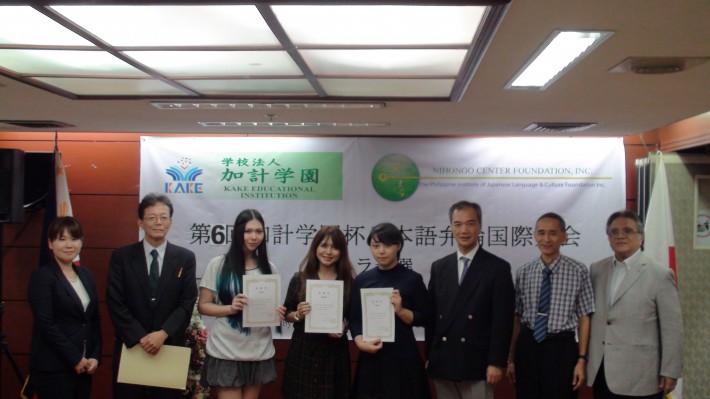 An admirer of Japanese food and culture, Nikki Gevaña, emerged as top winner in this year’s 6th Kake Trophy Nihongo Speech Contest held last September 10 at the Nihongo Center Foundation (NCF), Makati Campus. Besting four other contestants, Gevaña also received the honor to represent the Philippines in the international round of the speech competition to be held on November 25, 2016 at the Okayama University of Science in Okayama, Japan.

Gevaña, who started studying Japanese last year, delivered her speech on the common theme “私にとって一番大切な物” (Watashi ni totte, ichiban taisetsuna mono/The Most Important Thing for Me). The speech, which won her an educational trip to Japan, cash prize, and tuition incentives, highlighted the importance of education and how it can be an impetus for improving one’s life and achieving success. Moving into the international competition, Gevaña also has a chance to grab a 2-year scholarship at any of the three universities under the Kake Educational Institution.

Other winners in the contest include Leah Uychiongco who came in at 2nd place and Maria Roldan at 3rd place. Uychiongco’s speech expressed how human life is the most important thing for her while Roldan talked about love and how it helped her get through life’s struggles.

Tatsuo Kitagawa, director of the Japan Information and Culture Center (JICC), together with Yoshiya Yoshimi, director of Kake Educational Institution, and Kenjiro Ogata, academic advisor of The Philippine Institute of Japanese Language and Culture (PIJLC) and NCF made up the prestigious panel of judges. PILJC and NCF president, Philip Sanvictores welcomed the guests and participants with his opening remarks, while faculty member, Josef Carlo Orillo took on the emcee’s role during the event.

The Kake Trophy Speech Contest is an annual competition showcasing the Japanese Language skills of PIJLC and NCF students. Winners get scholarships and tuition fee waivers from its main sponsor, Kake Educational Institution based in Okayama, Japan, and co-sponsor, PIJLC and NCF. The event is also supported by JICC representing the Embassy of Japan.