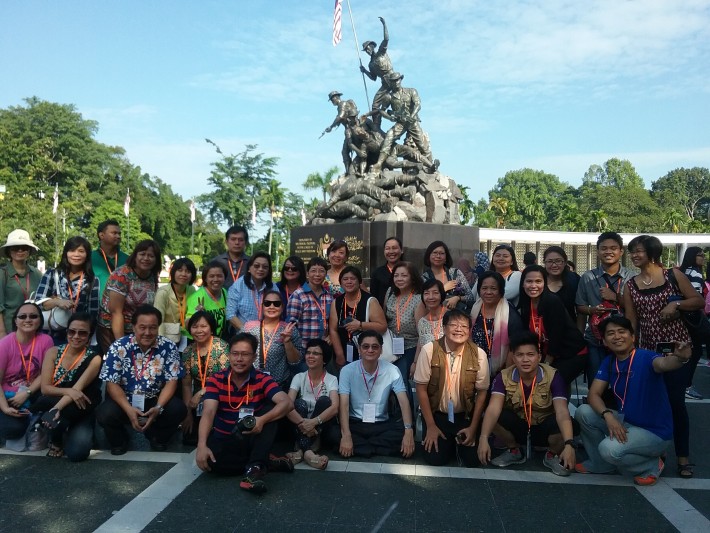 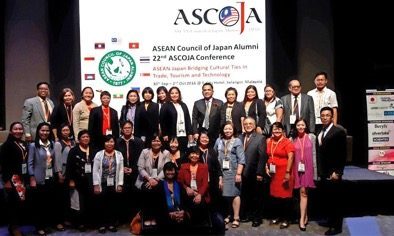 With nearly 400 total registered delegates, the Philippine Federation of Japan Alumni (PHILFEJA), comprised one of the largest delegation with 44 participants who joined 22nd Conference of the ASEAN Council of Japan Alumni (ASCOJA) held on September 30 to October 2, 2016 at E-City Hotel@One City in Subang Jaya, Selangor, Malaysia with the theme “ASEAN-Japan: Bridging Cultural Ties in Trade, Tourism and Technology.”

The conference, which also featured the Asian Japan Alumni (ASJA) International Symposium, was organized by the Japan Graduates Association of Malaysia (JAGAM) a year after it was held in Manila with the successful hosting by PHILFEJA under the leadership of Mr. Philip Sanvictores. The conference’s other major highlight was the holding of Japan Graduates’ Invention Exhibition with the theme “Japan Graduates Impact Lives”. The three PHILFEJA members’ product exhibitions won major awards.

In his opening speech, Dr. Ooi Chee Keong, JAGAM president and ASCOJA chairman, explained that “the conference will provide the opportunity to discuss how Japan and ASEAN can work together in trade, tourism and technology for mutual benefit as it provides platform not only to share knowledge but also to foster better relationship and understanding among member countries.” His speech was followed by the keynote message of Y.B.Dato Seri Ong Ka Chuan, Malaysia’s second minister of international trade and industry. He described how “Japan remained as ASEAN’s third largest trading partner and the second largest source of foreign direct investment inflows.” He expects that these rankings will be strengthened substantially with the implementation of the ASEAN Economic Community and with the establishment of closer economic ties through various agreements such as the ASEAN-Japan Comprehensive Economic Partnership Agreement as well as the bilateral agreements signed between individual SAEAN member states with Japan.

The congratulatory message of Japan Prime Minister Shinzo Abe was also read during the opening ceremonies. He said that “for the coming years from the next fiscal year, Japan will receive a total of 1,000 university students from ASEAN countries at leading-edge laboratories of post-graduate courses of universities.” This, he said, “will reinvigorate exchanges of talented brains, expected to shape our future, and will push up innovation in Asia.” In the same vein, Japan’s former Prime Minister Yasuo Fukuda assured ASCOJA of Japan’s continued support through the “sincere activities conducted by Asian Japan Alumni (ASJA), the Japanese counterpart of ASCOJA.” In a message read on his behalf, he said that the “heart-to-heart relationship have been central to the basic philosophy of ASCOJA since its foundation and will remain so going forward.”

The three-day 22nd ASCOJA conference was also highlighted by an ASCOJA council meeting, a welcome reception, city tour and golf tournament. It was concluded by a dinner hosted by Japan ambassador to Malaysia-Dr. Miyagawa Makio, an invention awards presentation and ASCOJA members’ cultural performance, In the ASJA international symposium, Dr. Philip Ian P. Padilla, PHILAJAMES vice president, represented PHILFEJA by presenting a paper entitled “State of Science and Technology Education in the Philippines”.

In the invention exhibition, PHILFEJA showcased three product innovations. These were the following: “Bioorganic Fertilizers: Working with Microbes for Agricultural production Sufficiency” by Dr. Mannix S. Pedro and “Increasing Crop Productivity with Vesicular Asbuscular Mycorrhizal Root Inoculant (VAMRI)” by Dr. Marilyn Brown. Dr. Pedro and Dr. Brown are both Japan-trained researchers at the National Institute of Molecular Biology and Biotechnology (BIOTECH), University of the Philippines Los Baños. On the other hand, Mr. Dan Leonard L. Rayo, president, PHILCULTAROS and Jose Clemente H. Zulueta, IT professional and expert of Samba Corporation and Portal 4 Youth Foundation, Inc. presented “SAMBACiTIES – an online directory dedicated in promoting tourism and businesses in the ASEAN Region and Japan. ” This innovation aspires in making businesses of ASCOJA members readily accessible to a broader community to provide value to its membership. 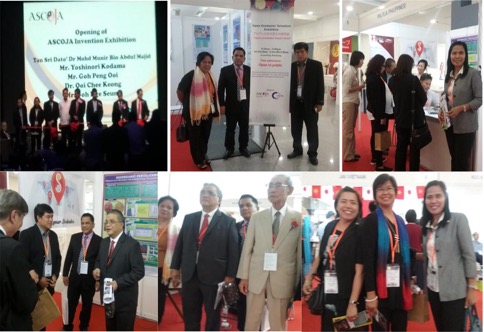 The viewing of PHILFEJA and other ASEAN chapters’ booth during the ASCOJA’s Japan Graduates Invention Exhibition .

As the conference approaches to its conclusion, conference delegates felt the celebration of success, warm friendship and hospitality, understanding and harmony. Finally, they realized ASEAN’s unity in spite of diversity and the social and economic relevance of Japan alumni in more years to come as they witnessed the memento presentation and handover ceremony with Brunei Association of Japan Alumni (BAJA), host of ASCOJA 23rd conference.

Conducting the ASCOJA conference in tandem with the ASJA symposium and Japan alumni exhibition of technology and innovation was a bold act and challenging task to do for these demonstrate the significant impact and contribution of Japan alumni in the ASEAN communities. “It was indeed a very enjoyable experience. My family had a grand time here”, says Dr. Ma. Luisa Enriquez, professor at DLSU and past president of PHILAJAMES. 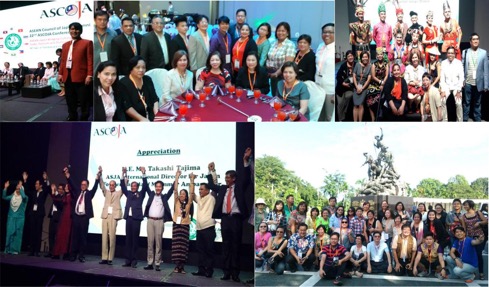 The PHILFEJA delegation in the 22nd ASCOJA conference, Malaysia. Kampai!!