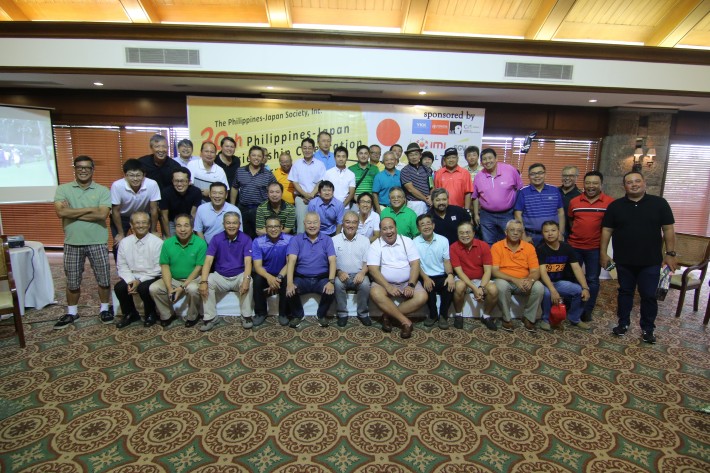 Beating the sunrise, members of the Philippines-Japan Society arrived at the Sta. Elena Golf and Country Club for the 39th PJS Friendship Golf Tournament held last March 15, 2017. Registration started at 5:30 a.m. with a total of 12 teams participating in the tournament’s Scramble format.

The Ceremonial Tee Off kicked off the tournament, after which all the flights proceeded to their duly designated Holes for the shot-gun tee-off.

Emerging as Champions for 2017 was the team of Samson Enriquez, Shuhei Matsushita, Dan Ferreras, and Leslie Umsico with a gross score of 63, less the team handicap 10 for a net score of 53.

The runner-up team consisted of Alex Tan, Takehiro Shimada, Toshiyuki Ishikawa, and Sixto Benedicto which grossed 67 less their team handicap of 13 for a net score of 54, just a point over the Champion Team.

The winning team members will have their names etched on the permanent trophy that is prominently displayed at the PJS head office in Makati. Each winning player however received a commemorative glass trophy.

After the morning games, a buffet lunch was served to the members and non-other than PJS president, Mr. Francis C. Laurel greeted and congratulated the participants and guests of the tournament. Other activities followed in the afternoon such the awarding of winners, a raffle event, and recognition of this year’s generous sponsors.

The Philippines-Japan Friendship Golf Tournament is an annual tradition of the association aimed at fostering friendship and cooperation between Filipinos and Japanese. Players were allowed to form their own teams with at least one Filipino or one Japanese member and a maximum of four players.