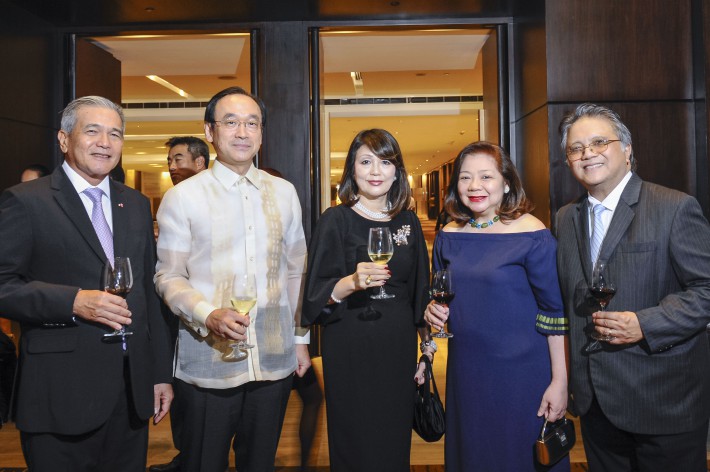 PJS & PHILJEC organized a welcome dinner reception in honor of new Japanese Ambassador to the Philippines, H.E. Mr. Koji Haneda and spouse on December 18, 2017 at the New World Hotel, Makati City. The event also served as the Christmas party for members and officers of both organizations.

In his speech, Ambassador Haneda expressed his gratitude and intention to work closely with the Philippine Government and different organizations related to strengthening PH-Japan relations:

“I would like to express my heartfelt gratitude to the Philippines-Japan Society, and the Philippines-Japan Economic Cooperation Committee for hosting this welcome dinner reception. It gives me a chance to meet your members who have worked tirelessly to strengthen the relationship between our two countries over the years.”

“I believe the core strength of our countries’ relationship lies in our people. It lies in you. Your presence here tonight reflects how much we can achieve when we work together. I am therefore determined to do my best and to work closely with the Philippine government, and institutions such as PJS and PHILJEC, during my stay here as Ambassador.”

Ambassador Haneda arrived in Manila on October 14, 2017. He started his diplomatic career in Manila in the early 1980s and thus referred to himself as a “Balikbayan” and expressed his delight for being in the Philippines again.

The Ambassador, in a statement, also pledged to work hard on promoting and the strategic partnership and friendly ties between the Philippines and Japan:

“It is my honor and privilege to be assigned as Ambassador of Japan to the Philippines. Indeed, I started my diplomatic career in Manila in the early 1980’s. Being a Balikbayan, I’m delighted to be here once again.

Under the strategic partnership, our bilateral relations have evolved to a significant level, as represented by the state visit of Their Majesties the Emperor and Empress in January 2016 and other frequent mutual visits of our leaders. Through the years, our partnership has achieved tangible outcomes in many areas, including infrastructure projects on an unprecedented scale, capacity building in counter-terrorism and maritime security, defense cooperation, and continued commitment of support to the Mindanao peace process. I am also pleased to see ever-growing people-to-people exchange between the Philippines and Japan in every field and level.

Building upon the past achievements, I pledge to exert every effort to further advance the strategic partnership and the friendship between our two countries. Maraming salamat po.” (source: Embassy of Japan in the Philippines http://www.ph.emb-japan.go.jp/itpr_ja/00_000381.html)