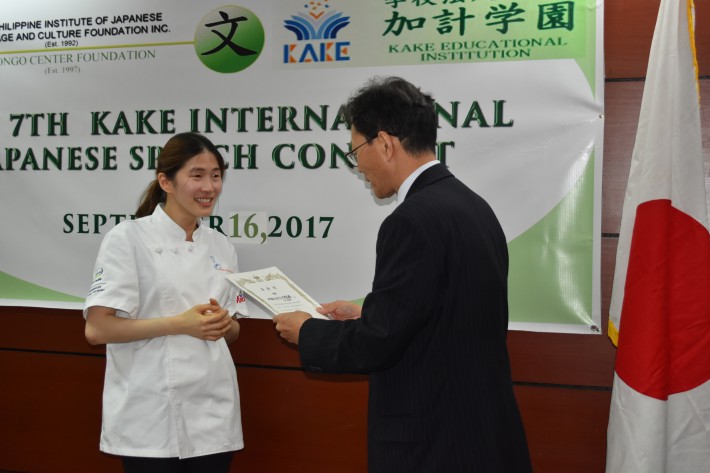 Having a life dream can motivate us to always give our best and never give-up no matter how heartbreaking the challenges may be. This is one clear take-away from Erica Eunice Minerva S. Lim’s winning speech in this year’s Kake Trophy Speech Contest titled “世界一のパティシエになりたい” (I Wish to Become the World’s Best Pastry Chef).

As top winner, Ms. Lim received an educational trip to Japan, and cash prize for her speech, which shared her struggles and triumphs while pursuing her life dream of becoming a pastry chef. She is studying Japanese in the hopes of working in Japan someday and becoming an apprentice of renowned Japanese pastry chef, Mochizuki Kanjirou. Ms. Lim will represent the Philippines in the international speech competition to be held in Okayama, Japan on November 17, 2017 where she hopes to win a 2-year scholarship at any of the three universities run by Kake Educational Institution.

Now on it’s 7th year, the event also awarded the 2nd place trophy to Aero Flamiano’s  “運命と話したい”(I Want To Talk with Fate), and 3rd place trophy to Kevin Paul Bautista’s “相互理解が深まるように” (I Wish to Deepen Mutual Understanding)—both thought-provoking speeches that presented an imaginary conversation with fate and a challenge to look beyond stereotypes and cultural differences respectively.

NCF and PIJLC President, Mr. Philip B. Sanvictores, opened the annual event with his Welcome Remarks followed by an inspirational talk from Mr. Ken Nakamura, Director of the Japan Information and Culture Center (JICC). Mr. Nakamura was also in this year’s panel of judges together with Mr. Yoshiya Yoshimi, Director of Kake’s Professional Development Office, and Mr. Kenjiro Ogata, NCF & PIJLC Academic Advisor. The Kake Trophy Speech Contest is co-sponsored by NFC & PIJLC and is supported by JICC.