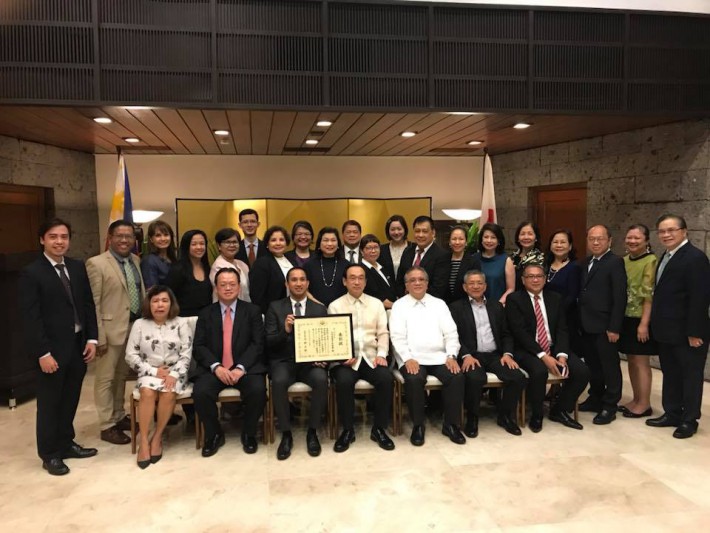 The Japanese Ministry of Foreign Affairs (MOFA) awarded The Foreign Minister’s Commendation to PHILFEJA during a conferment ceremony last September 19, 2018 at Ambassador’s Residence in Makati City. The award recognizes PHILFEJA’s more than 4 decades of significant contributions to the promotion of friendship between the Philippines and Japan through its role as the umbrella organization connecting all Filipino Japan alumni and promoting the values of Japanese education in the Philippines.

PHILFEJA President, Atty. Powel del Rosario, accepted the award and expressed his gratitude for the recognition, which he said would not have been possible if it were not for the efforts of PHILFEJA’s founders 42 years ago.

“Our deepest appreciation to our dear Dai-Sempai, the late Ambassador Jose S. Laurel III and his late son Benjie, whose initiatives and dedications will always be part of PHILFEJA memories,” said Atty. Del Rosario in his acceptance speech. “We are more than 20,000 (members) all over the country. PHILFEJA’s members come from various backgrounds who have benefited from not only education in Japanese universities, but we also have members who received long and short-term trainings, research and similar activities in Japan. I can say that Japan has friends in all the provinces in the Philippines,” he added.

H.E. Mr. Koji Haneda, Ambassador of Japan to the Philippines, presented the award in behalf of Foreign Minister, Mr. Taro Kano. The Ambassador recalled the many accomplishments of PHILFEJA including the special meeting of PHILFEJA members with Their Majesties The Emperor and Empress of Japan in 2016, and the establishment of the ASEAN Council of Japan Alumni (ASCOJA) in 1977, which was made possible by the initiative of the founders of PHILFEJA.

“PHILFEJA’s growth and the extent of its work and accomplishments throughout its 42-year history are testaments to the enduring value of cooperation, hard work, and persistence. I trust that PHILFEJA will remain steadfast in its legacy. These are feats worthy of being emulated, and worthy of the high distinction we now bestow,” said Mr. Haneda.

Embassy of Japan in the Philippines Press Release