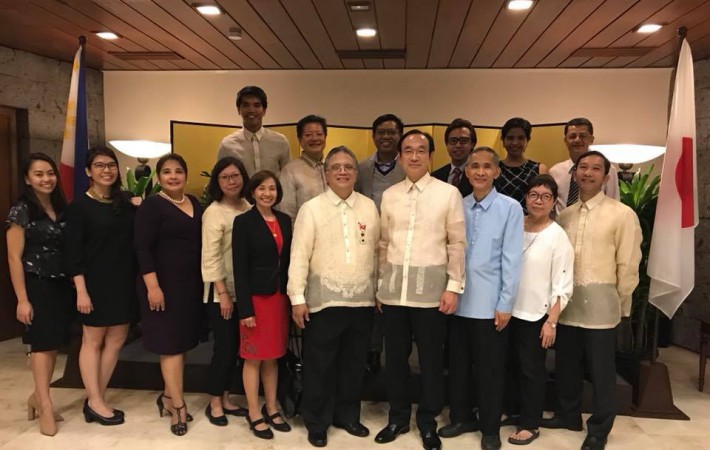 The Government of Japan conferred upon NCF President, Mr. Philip B. Sanvictores, the Imperial Decoration, The Order of the Rising Sun, Gold Rays with Rosette in fitting ceremonies held last February 9, 2018 at the official residence of H.E. Koji Haneda, Ambassador of Japan in the Philippines. The prestigious decoration recognizes Mr. Sanvictores’ decades-long efforts in furthering good relations between Japan and the Philippines through his work for the Nihongo Center Foundation (NCF), the Philippine Institute of Japanese Language & Culture (PIJLC) and the Philippine Federation of Japan Alumni (PHILFEJA).

Following the footsteps of his father – Ambassador Benjamin F. Sanvictores who was also conferred The Order of the Sacred Treasure, Gold Rays with Neck Ribbon in 1985 – Mr. Sanvictores dedicated his decoration to the faculty and staff of NCF and
PIJLC and to the members of PHILFEJA.

“This Order of the Rising Sun, Gold Rays with Rosette, truly belongs to the loyal and hardworking Nihongo sensei of PIJLC and the Nihongo Center. It also belongs to many fellow-former Filipino ryugakusei who actively support and participate in the activities of PHILFEJA, established 41 years ago to help promote Philippines-Japan and ASEAN-Japan relations,” said Mr. Sanvictores in his acceptance speech.

He also honored people who helped and guided him throughout his days as a ryugakusei in Japan and expressed his gratitude to those who continue to support him in his endeavors as a businessman and leader of various associations affiliated with the Philippines-Japan Society.

At the close of his message, Mr. Sanvictores spoke about his wish for the future of Philippines-Japan relations:

“Today, I invoke the same prayer – that generations after us would catch the fire that drives this advocacy for close, friendly, mutually beneficial Philippines-Japan relations, and to keep that fire burning well into and beyond their times. I hope that we in the various organizations of the Philippines-Japan Society will live up and be equal to the honor your Government has conferred upon us. And most importantly, may our shared advocacy of closer, friendlier, more mutually beneficial relations between our two peoples always bring honor and glory to God.”

To read the full acceptance speech of Mr. Sanvictores, please refer to “Resources” below.

In 1990, upon the instructions of Ambassador Jose S. Laurel III, Mr. Sanvictores submitted an application with the Japan Foundation for a grant to dispatch a Japanese Language Teacher, who then sent Prof. Kenjiro Ogata. Even after the expiry of the said grant, Prof. Ogata remained in the Philippines and continue his work as Academic Advisor to both NCF and PIJLC, inspired by the noble and lofty ideals of Amb. Laurel for better understanding and closer friendship between Filipinos and Japanese through Nihongo.

The Japan Foundation grant underpinned the establishment of the Philippine Institute of Japanese Language & Culture (PIJLC) in 1991 under the patronage of the Philippines-Japan Friendship Foundation (PJFF). In 1997, in response to an appeal by the Government of Japan, PJFF founded the Nihongo Center Foundation (NCF) to continue the work and practice of the erstwhile “Nihongo Gakko” of the Japan Information & Cultural Center.

In 2014-2016, Mr. Sanvictores served as President of PHILFEJA, the umbrella organization of the different groups of former Filipino students in Japan. In 2015, under his leadership, PHILFEJA hosted the 21st Conference of the ASEAN Council of Japan Alumni (ASCOJA).  In January 2016, during the state visit to the Philippines of Their Majesties, the Emperor and Empress of Japan, Mr. Sanvictores played a key role in organizing the meeting of Filipino former students and Japanese government scholars with Their Majesties, which was an integral part of the visit.

About The Order of the Rising Sun

Established in 1875 by Emperor Meiji, The Order of the Rising Sun is the third highest order bestowed by the Japanese Government to people who have made distinguished achievements in the fields of International Relations, Promotion of Japanese Culture, advancement in their field, development in welfare, and preservation of the environment.