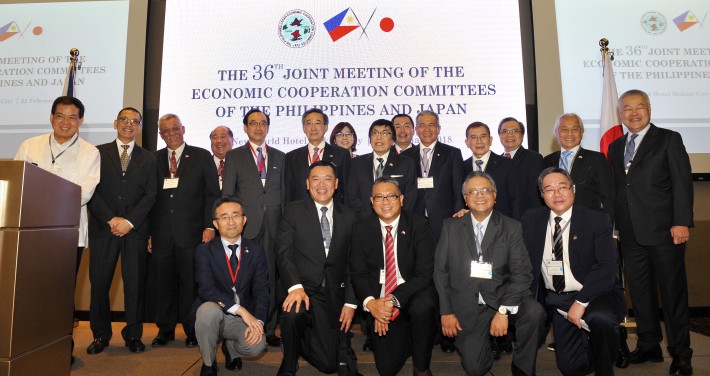 PHILJEC and JPECC Chairmen Atty. Aniceto G. Saludo, Jr. and Mr. Teruo Asada respectively welcomed the participants with their opening remarks, both stating that the two countries are in a “Golden Age of Partnership”. In their speeches, the two chairmen emphasized the much-needed infrastructure projects such as the first major subway in Metro Manila and other railway projects in South and North Luzon and how the cooperation and strong political will in completing these projects will surely sustain Philippine economic growth and revitalize Japan’s economy as well.

Japan has been among our country’s largest investors and trading partners while Philippine companies and workers have likewise contributed to the dynamism and vibrancy of the Japanese economy.

I look forward to this joint meeting, as it will not only have the potential of expanding cooperation to other emerging sectors, but will also serve as a lynchpin for greater stability and peace within our region (read full message).

Top-level diplomatic and bilateral Japan-Philippines relations have never been as close and vibrant as they are today.  I sincerely welcome the development of various infrastructure facilities in the Philippines through the “Build, Build, Build” policy spearheaded by the Duterte Administration. Japan will continue to contribute vigorously towards the improvement of Philippine infrastructure in order to boost it up to even higher.

I congratulate PHILJEC and JPECC for holding today’s meeting and hope that you will have a most fruitful and productive conference leading to even deeper Japan-Philippines economic relations (read full message).

Also present to give the keynote address was National Economic and Development Authority (NEDA) Secretary Ernesto Pernia and Special Guest Speaker, Department of Transportation (DOTr) Secretary Arthur Tugade who entertained questions regarding the implementation of the “Build, Build, Build” Program.

In the second plenary session, presentations from various corporations and their participation in the ““Build, Build, Build” Program were presented. Speakers included CEOs, General Managers, and Chairmen from multinational companies in both the construction and transportation industries:

To view all related presentations and speeches from the 36th PHILJEC-JPECC meeting, please refer to our “Resources” below.