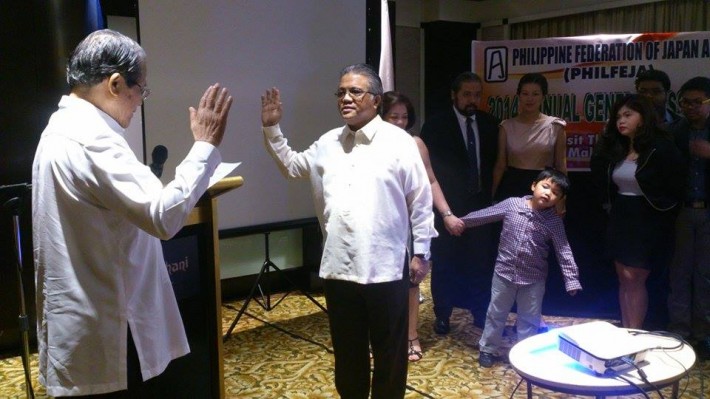 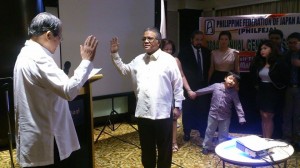 With his father Amb. Benjamin F. Sanvictores administering the oath of office, PHILFEJA President Philip Sanvictores was inducted into office on October 11, 2014 in the presence of his family shown here with his wife Mrs. Patricia Maribel C. Sanvictores.

Mr. Sanvictores began to discharge the functions of PHILFEJA President Benjie Laurel when the latter’s health began to fail.  The first occasion was as the personal representative of President Laurel at the dinner tendered by Amb. Toshio Urabe for the members of PHILFEJA on March 19, 2014.  Thereafter, as the representative of Mr. Laurel, Mr. Sanvictores chaired the 28th ASJA International Directors’ and ASCOJA Governors’ Meetings in Tokyo on March 28th, both of which Mr. Laurel was the presiding Chairman.

He was then appointed Executive Vice-President of PHILFEJA during the Board meeting held on April 22, 2014 and has since presided over PHILFEJA Board meetings on behalf of President Laurel.

Mr. Sanvictores holds a Bachelor of Arts in Communication Arts from the Ateneo de Manila University (class of 1975).   He graduated from the 10-month intensive Nihongo Course of Kokusai Gakuyu Kai 国際学友会 (International Students Institute) in Tokyo, Japan in 1982, under the short-lived Asahi Dow Chemical Co., Ltd. Japanese Language Scholarship and has since been active in Philippines-Japan Society affairs and activities. He is the Vice-President (and a Trustee) of the Philippine Institute of Japanese Language & Culture Foundation (PIJLC) and the Nihongo Center Foundation, Inc. (NCF) both of which he helped establish as the personal project assistant of the late Amb. Jose S. Laurel III in 1991 and 199_, respectively.  Mr. Sanvictores is an active member of the Philippines-Japan Economic Cooperation Committee (PHILJEC) and has attended many of its annual Joint Meetings since the early 1990s.

He is President of Netmarks Philippines, Inc. – a joint venture company with Uniadex® Co., Ltd. of the Nihon Unisys® Group of Japan.  Netmarks PH is engaged in IT network systems integration.  He is also President of Lionapex Equipment (Phil.), Inc. which principally distributes and maintains Brother® CNC Compact Machine Tools widely used by manufacturers of precision machined parts and components for the HDD, electronics and automotive export industries.

He is the son of Amb. Benjamin and Mrs. Nennette Sanvictores, both of whom are prime movers of the various PJS organizations.  He is the younger brother of Gerry, Secretary-General of PHILJEC.  Philip is married to Patricia Maribel and they have four sons (two already married), one daughter and three grandsons.  His second son Raymond graduated from the Faculty of Policy Studies of Nanzan University 南山大学in Nagoya and is married to Megumi Murata who hails from Toyohashi, Aichi-ken.  Another son, Davey was an Ateneo exchange student at the International Christian University 国際クリスト教大学in Tokyo who later completed his Masters in e-Business at the International University of Japan 日本国際大学 in Niigata.